One of the initiatives being rolled out by the Dept of Transport, Tourism & Sport is the National Cycle Network. Over the next ten years, the Dept hopes to work with local authorities to create a network of high-quality, long-distance, off-road walking and cycling paths.

The Dept. produced a ‘scoping study’ in 2010 which identifies the priority routes they wish to see developed. You can access the study at http://www.smartertravel.ie/sites/default/files/uploads/FINAL%20NCNScopingStudyAugust2010%5B1%5D.pdf

The idea is that these routes will become ‘trip attractors’ in their own right, thus increasing the tourism amenities in the country, and opening up the countryside for the enjoyment of visitors and local people alike.

Map from the Scoping Study, showing a long distance route from Sligo to Dundalk, through Clones and Monaghan.

The NCN in Monaghan

In 2012, Monaghan County Council and Monaghan Town Council submitted a joint bid to the Dept. for funding under their NCN measure to re-open  tow path along the section of the disused Ulster Canal which flows through Monaghan town.  The Dept awarded €471,000 to the two Councils, and work is underway.  It is intended that the path will be open by the end of 2013.

The project is being called ‘The Ulster Canal Greenway’.  Greenways are a term which is used all over the world for walking and cycling infrastructure which have been developed from disused transportation infrastructure such as railways and canals.  For an example of what you can expect, visit the Great Western Greenway in Co. Mayo, which uses a disused railway line between Westport and Achill.

We view the Monaghan project as a Phase I.  It will facilitate the completion of a high quality network of cycle paths through Monaghan town, and will thus help us to promote the Smarter Travel agenda via the Active Travel Towns initiative.  However, we hope eventually to push westward to Clones, where we hope to meet Waterways Ireland as they work towards re-opening the canal itself between Belturbet and Clones. We also hope to continue eastwards of the town, towards the Armagh border, linking to beautiful Glaslough village, home to Castle Leslie. 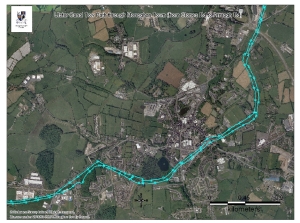 Route of Ulster Canal through Monaghan town, from Clones Road in bottom left corner, via the Convent Lake in centre, on to Old Cross Square, then on to the Armagh Road in top right corner.